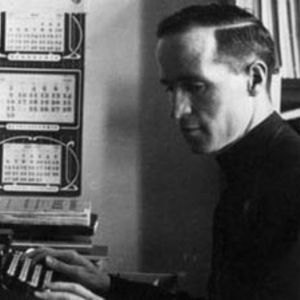 A man filled with the love of Jesus, wishing that his whole life be a proclamation of the Good News, Father Henri Roy touched many lives. The witnessing that follows is from Thérèse and Henri Séguin and Jeanne and Julien White, leaders of the first days in the Young Catholic Workers movement in Montreal. Reading these lines, you will be able to find the apostolic fire that Father Roy transmitted to all those he met. This witnessing appeared in Je Crois magazine in June 1985.

Father Roy was “obsessed” with the desire to become a saint and he didn’t even want to consider the possibility that others would not also be saints. His only desire for everyone, especially the poor and the young, would have the same longing for holiness.

He had chosen to work with the youth of the working class. Being close to them, he knew it was possible to find young men and women ready to give themselves without reservation for the salvation of their brothers and sisters. He had discovered among the youth the possibility to put their talents to the service of their brothers and sisters of the working class.

His way of coming into contact with them was not ordinary; he knew in the “blink of an eye” how to discover and appreciate the hidden value in the depths of a soul, even though the exterior shell often times did not give much hope. From the first encounter with him, we had this vague impression of being as transparent as a window that was recently washed, for he was able to unroll the film of our life as if he had seen us be born.

He knew how to be so convincing and enthusiastic that you left that encounter “free as a bird”, overflowing with a great love of Jesus and an unbounding self-confidence and trust towards the whole universe!

Without you being aware of it, Father Roy had just given you an orientation that would mark your whole life!

From the onset of the second encounter, it was the “sending off to the mission” to your brothers and sisters in your places He had uncovered talents in you that you surely ignored and he would do what was necessary for them to give their full measure. That is how he entrusted you with tasks you had never even dared to think of, but that he knew that you were up to them because you would live them out “as a team” with Jesus.

Father Roy, who knew how to form us to his ideal, expected the maximus from us, and we gave this maximum with joy for he trusted us wholeheartedly; for what he expected of others, he had already given it himself… and even more!

He was an innovator in many fields and of course we could say of him that “he was 20 years ahead of his time”; we could have said 40 and 50 years ahead, and it would still be true!

We thank the Lord every day for having placed Father Roy on our road; he remains and will always be in our hearts:

• a priest, a true priest, all priest;

• a fool for Jesus, man of great prayer, whose celebration of the Eucharist transported us to heaven;

• a priest whose first and constant worry was the salvation of souls so as to “populate heaven to the britches”;

• a priest happy, joyful, even in the worst of trials, for he had his share of suffering, physical as well as inner pain; oftentimes it was the price to pay for his success;

• a coach, a man before his time, a dedicated worker, and a great, great, very great friend of the youth, especially of the poor.