To Be The Voice Of The Pope ! 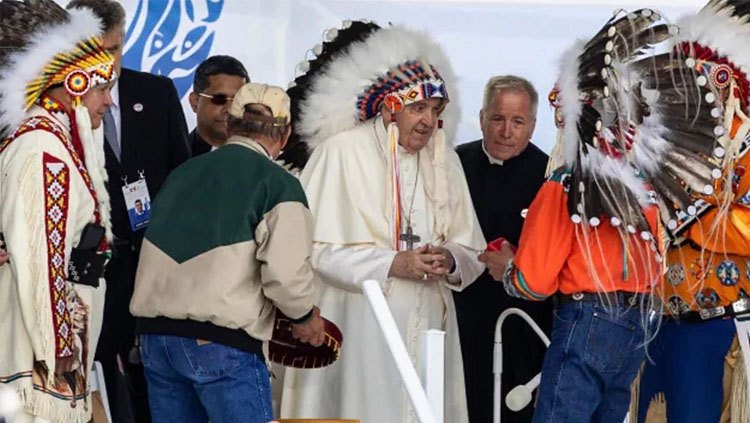 Ten days ago, I had one of the most beautiful experiences of my life ! From July 24 to 29, I had the privilege of being the Holy Father's translator during his apostolic visit to Canada. For 6 days, I was the voice of Pope Francis !

On June 15, I received confirmation that I had been appointed to offer this service to the Holy Father during his upcoming visit to Canada. I would be at his side at all times, translating conversations and transmitting his words to his audience. In addition, I had been asked to do two translations, for his first and last speeches in the country, but a last-minute change in plans meant that I would translate eight of the nine major speeches of Pope Francis during his penitential pilgrimage to Canada.

So I left on July 22 for Edmonton where Pope Francis would arrive a few days later. I had been preparing for the last few weeks by reading various articles on the objective of the trip: reconciliation with the First Nations, Métis and Inuit peoples in order to open the way to healing and hope. I learned about the meetings between the Pope and various indigenous groups in Rome last spring. I realized that this journey had the possibility of a new day for our indigenous brothers and sisters and for the “living together” of all Canadians.

It was 4:15 a.m. while walking to the boarding gate when I saw in the airport bookstore a novel by Michel Jean, a journalist and writer of Innu origin, The Wind Still Speaks of It. This novel shows the horror and suffering experienced in residential schools through the eyes of Virginie, Marie and Charles. The years have passed and 77 years later, the pain is just as vivid.

As the plane lands in Edmonton, I finish the last page of the novel… and I am overwhelmed. I tell myself that this is a novel, that no doubt there are pages that have been exaggerated… And yet, throughout the week, I will see, hear and touch stories that are no longer pages of a novel, but fragments of lives that have been forever wounded and bruised by the residential school experience. They are no longer characters in a novel, but indigenous brothers and sisters; their names are Gerald, Wilton, Rosanne or Marie-Anne.

On July 25, Pope Francis will travel to Maskwacis, about 100 km from Edmonton, for his first meeting with the indigenous people. Upon arrival, he will take time to pray in the small church. Along the walls of the church, young indigenous people hold up a long orange banner with the names of the residential schools and the names of the students who died in them. More than 4,000 names… each with a story, a family, a community. Pope Francis will take time to go around the church, stopping to pray, to read names, to remember. He moves slowly as if to soak up all this suffering. At the end, he takes the banner in his hands and kisses it.

Then we start walking to the cemetery where the Holy Father, alone, will pray in silence. After many minutes, we continue our walk to arrive at the meeting place, without first stopping in front of the place where the residential school existed. Here, the Pope was welcomed by the local indigenous leaders who would walk with him to the meeting place.

Traditional songs, dances, and official speeches set the stage for the Holy Father to address his first words on Canadian soil to the indigenous peoples. A microphone was brought to him and I went to the other microphone. Moved by the people and the places, the voices and the silences, I echo the Holy Father’s words in English. And the words are heavy with meaning.

“I thank you for making me appreciate this, for telling me about the heavy burdens that you still bear, for sharing with me these bitter memories.  Today I am here, in this land that, along with its ancient memories, preserves the scars of still open wounds. I am here because the first step of my penitential pilgrimage among you is that of again asking forgiveness, of telling you once more that I am deeply sorry. Sorry for the ways in which, regrettably, many Christians supported the colonizing mentality of the powers that oppressed the indigenous peoples. I am sorry. I ask forgiveness, in particular, for the ways in which many members of the Church and of religious communities cooperated, not least through their indifference, in projects of cultural destruction and forced assimilation promoted by the governments of that time, which culminated in the system of residential schools.”

Pope Francis will repeat these words throughout his journey. But more than words, there will be gestures, glances, time to listen, silences, tears and above all a love overflowing with tenderness and compassion to recreate bridges with wounded brothers and sisters. There will be the hope that this new step to meet the other will allow a new dawn of healing that “makes all things new”.

As the week progresses, I have the deep conviction that my voice can also bring consolation and courage. They are not my words, but they have my accent, my emotion, my desire to reach out to the other in the depths of their hearts. May every indigenous brother and sister hear not only my voice but also the words of the Pope who invites them to hear the echo of the Creator who speaks to each of his children and tells them how great is their dignity as children of the Father, how much they are loved from all eternity !

There is so much more to say about this week. So many memorable encounters, so many beaming faces when the Pope approached people, so much joy in the streets of Quebec City as the Popemobile passed by, so many healings… Each and every one of us made our own inner pilgrimage throughout this apostolic visit. And the journey is not over yet ! When I left Iqaluit, as my mission as translator of the Holy Father came to an end, I could have said “mission accomplished”. But the simple truth is that the work has only just begun. Being the voice of the Pope also means carrying his message of peace, reconciliation, healing and hope… every day !

PrevPreviousMy Heart is Saddened
NextIs Politics an Ugly Word ?Next